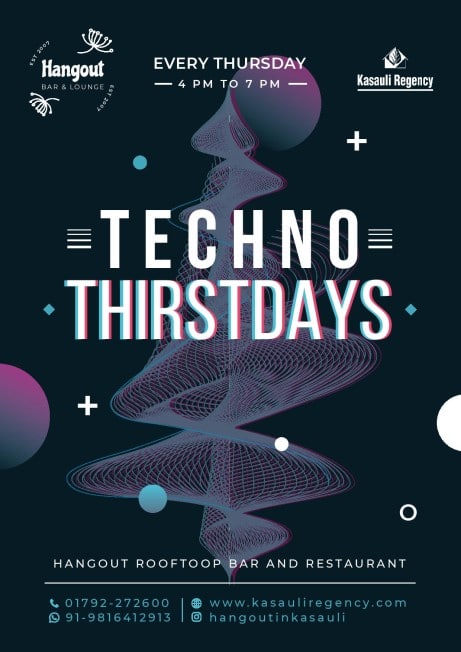 We play Techno Music on all Thursdays from 4 to 7 pm at Hangout Rooftop Bar.  Followed by Deep House Music and Jam sessions from 10.30 pm onwards. So join us for Best Techno Party in Himachal, India at Hangout Rooftop Bar and Lounge. Djs Saksham Khanna,  Shantanu, Veda and Paras play some crazy Techno music and shift to Trance later at Hangout.  Kasauli Regency houses the Most Happening Bar and Lounge in Kasauli, Himachal Pradesh, India.

Today is the 68th Successive Techno Music Evening . Techno Music in Himachal is trending fast, I have travelled 20 countries and been to many parties playing Techno/Deep House Music. DJ’s at Hangout are not a bit less than the European DJs. Believe me and join us today. I have been to a similar place in Amsterdam. Trance Music Parties are already very common in travel destinations in Himachal. Now best Techno Party in Himachal, India happens at Hangout Bar near Chandigarh city. Only an hour drive from Chandigarh, Panchkula.

Check Out Videos of Techno Party at Hangout on Youtube

Best in Techno Music our ‘DJ Maalbro’ Saksham Khanna
SAKSHAM KHANNA, known by his stage name DJ Maalbro is a Disk Jockey from Solan, Definitely the Best Techno DJ in Himachal Pradesh, India. Having been an electronic music enthusiast since his childhood, DJ Maalbro started his professional DJing journey in 2018 at a young age of 22. Since then he has moved up the ladder in DJing and is upping the game in the House, Techno and Psy scenes in North India. He has played at the Himala Music Festival and has opened for artists like Ma Faiza, Arreo and Browncoat. He has been an active part of this techno movement and hosts a weekly Rooftop techno evening in Kasauli.

We don’t take requests for Music or Songs

Global Music is always played at Hangout in  Best Boutique Hotel Kasauli Regency So basically discouraging kind of regular music played in marriage parties. Because of Music, Hangout has been famous among foreign Tourists. Travelers from 15 Countries around the world have volunteered here at Hangout. We had the best New Year’s Party 2021 at Hangout last Thursday and not even a single Hindi or Punjabi song was played. Wow ! that was the best New Year’s Party ever in my Life in Himachal. All other hotels in Kasauli stick to regular Punjabi music played on the New Years Eve.

Introduction to this Music

Dancing has been a very vivid art form of expressing one’s feelings and emotions since ancient times. But it is also one of the best methods of exercise. So you must agree that dancing joyfully helps keep an individual healthy, fit and young at heart.

The tempo or BPM (Beats Per Minute) of techno ranges between 122-130. The human heart beats at about 80-100 BPM normally, but increases up to the same range as the BPM of Techno music while dancing. So Just like the phenomenon of resonance, this is when the human heart and the music are in synchronization. This makes us feel ecstatic and improves our blood flow along with several other health benefits. So, if you really want to free your body, shake a leg and groove to uplifting techno beats; Hangout Rooftop Bar and Lounge is the place to be. Few hotels in Kasauli have licensed bars and none has this kind of music or live musical evenings or Open Mics.

Hangout used to organize Headphone Parties a European concept of listening to music late at Night. Kasauli Regency is the first Hotel in India to Organize Headphone or Silent Noise parties at Hangout. Because of the current Corona Pandemic we have discontinued these Parties. Since We play 3 channels on Headphones: Western Music, Techno/Reggae, Indian Classical/ Trance. So you can hook on to any channel by the press of a button and click some great Pictures. But these days Techno Parties are getting famous at Hangout Bar Every Thursday.